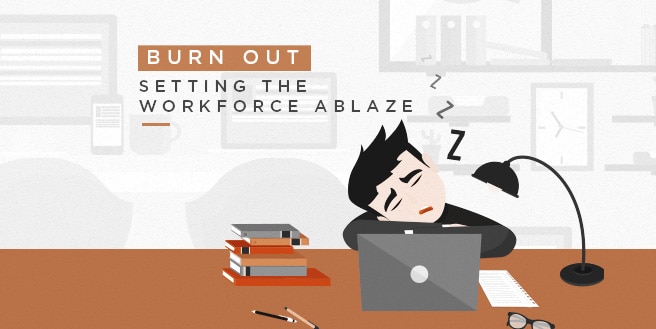 As kids, we were told that the secret to success is hard work. Though true, what the grown-ups meant by hard work is grinding through long hours and late nights. Powering through fatigue, thinking that all of this labor will be worth it – it’s effective, tycoons from the past can attest to it.

But behind the success stories of businessmen working their way up towards success, is the ugly truth – the drawback laborers of the early years dismissed; burnout.

Employee burnout is not much of a selcouth occurrence in the industry. It’s nothing new to most companies yet in the recent years, it posed as a big threat to the labor force worldwide.

Records of profit and growth in companies, projected economy growth of almost 50% and unemployment rate decreasing – all mask the truth that more and more individuals are working harder than before for a minimum wage.

A recent study conducted by Kronos Incorporated and Future Workplace, said that 95 percent of human resource leaders reported their workforces being sabotaged by employee burnout. To make things worse, the said number came from more than 600 Chief Human Resource Officers and HR managers from organizations of all sizes.

In addition to this, the psychological and physical issues burnout brings costs an estimated $125 billion to $190 billion a year of healthcare spending.

What set the world on fire

What caused the sudden spread of burnout are pretty obvious. Productivity of employees skyrocketed between 2000 and 2014 yet wages and benefits remained the same. According to the Economic Policy Institute, productivity increased by 21.6 percent, but wages only grew by 1.8 percent during the said time period.

The unfair compensation is also paired with unreasonable workload to boast. More priorities are given and executives expect their employees to multitask with their phones and laptops. The most capable ones in the workforce are the usual victims of overloaded workload.

Organizational control also has a fair share of fault with the increase experts have observed. Human Resource Leaders from the study of Kronos Incorporated and Future Workplace have said that poor management, the employee’s inability to see a clear connection between their individual role and corporate strategy as well as negative workplace culture fuels burnouts.

The aforementioned ailments accompanied by outside factors like long commutes and stress in daily life contribute to the overall chances of an individual to be burnt out.

Hard work is and remains to be a critical part in achieving success but sometimes you’re exerting so much effort yet it does so little – damaging what’s left of your mental being.

Giving yourself a proper break – one where you don’t constantly check your phone for emails and whatnot – is important.  Overworking your brain is actually futile to your productivity. A 2011 study said that our brains take in about 174 newspapers’ worth of information in a normal day. It’s no surprise that our brains get overwhelmed since its capacity to process is only limited.

Science suggests that taming multitasking is therapeutic. It gives the brain the chance to breathe and restore itself after working so hard. Several studies have said that taking naps (even 10 minutes naps) improve cognitive function, vigor and even decreases fatigues.

The world expects a lot from an adult; build careers and futures without forgetting about personal relationships and happiness. They hoped for a balance between those four things yet made it so hard to achieve. It gets paralyzing at one point and we find ourselves hoping and praying for a few minutes for ourselves.

Luckily, some of us got sick of the work culture the older generation left us with and created an innovation that creates the balance all of us have been looking for.

Offering freedom to isolate and collaborate, “Coworking Spaces” is a kind of flexible workspace that prioritizes productivity and creative freedom. Open for freelancers, professionals and entrepreneurs of all industries, coworking spaces offers business lounges, private desks, meeting rooms and conference rooms. It allows its members to choose between working alone or collaborating with other members – giving them more control on their productivity

Grown-ups always told us that adulthood is easy but not one of them said it would be this hard and arduous. From one adult to another, we’re here to help you extinguish the ember that can kickoff burnout. The Start of Something New: 3 Tips for The Aspiring Entrepreneur
0 replies